of the marvelous dangers of baroque opera 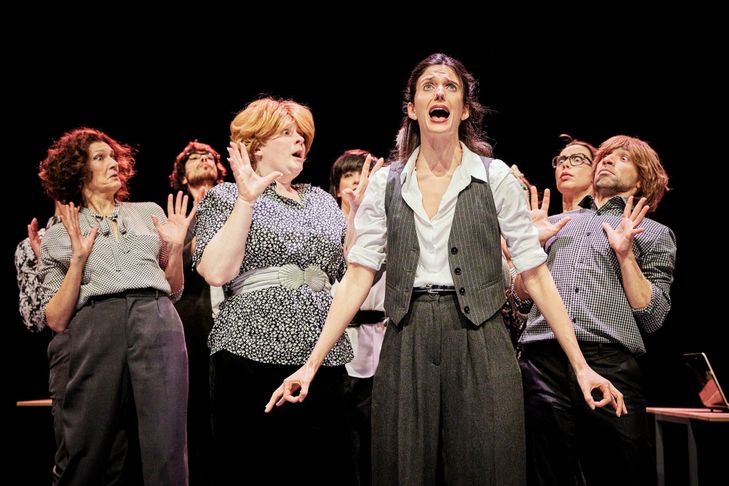 The rhetoric of affects animates baroque opera, it is even its foundation. What’s astonishing then that, at the end of a performance (no doubt particularly convincing) of The Orontea by Antonio Cesti (1623-1669), the characters imagined by David Lescot are turned upside down?

In a ballet where the collective takes precedence, skilfully prepared with a team cohesion that commands admiration, this disorder of emotions will lead everyone to rethink their life, radically change their trajectory, question their loves. Private and public, even political love affairs, some of our heroes working at the European Parliament in Strasbourg, the city where the play celebrating the marriage of reality and fantasy takes place.

Like a musical, the sung numbers, supported by an instrumental quartet in a pleasant jazzy spirit, are embedded in the theatrical sequences. Under the pen of David Lescot who signed words and notes, alternate joyful moments and melancholy ramblings, ironic sketches and existential duets.

Wonderful, the consultation by the depressive Anandré (David Lescot touching in his pursuit of a soul mate) of a historian specializing in “emotions produced by aesthetic objects in France in the 16th and 17th centuries”. Jubilant, the parliamentary jousting around the prohibition of a pesticide which swells in a textual and vocal crescendo worthy of the great lyrical finales. It magnifies the talent of actress-singers of the flamboyant Ludmilla Dabo and the virtuoso Pauline Collin, both perfect in delirium under control. As for Élise Caron, she proves to be irresistible in the role of the session president, adopting the stuffy tone of the politicians of yesteryear – which, moreover, may still be current…

The tender or serious register seems more conventional, despite the lunar poetry of the actors (crystalline Emma Liégeois, Alix Kuentz as if straight out of a film by Jacques Tati, etc.), the text written by David Lescot not avoiding certain clichés or easy . This is also where the tempo of the show languishes and where the spectator, if he dared, would suggest a few cuts. Admittedly, we focus on the different characters and the disorder that will revolutionize their lives. But the theatrical material seems too tenuous not to slip into a pleasant repetitiveness which, moreover, turns a bit short when the two hours of the show end.

In addition, while Sound Week is being held, once again highlighting the virtues of nuance, polishing the amplification of voices and, above all, of instruments, would allow charm to be distilled into finesse. And the representation to play more on the thread of quivering feelings.

Death of variety and jazz musician Marcel Zanini, at the age of 99

unravel the threads of the present time

slices of life in brooklyn