more than a million demonstrators, new day of mobilization on January 31 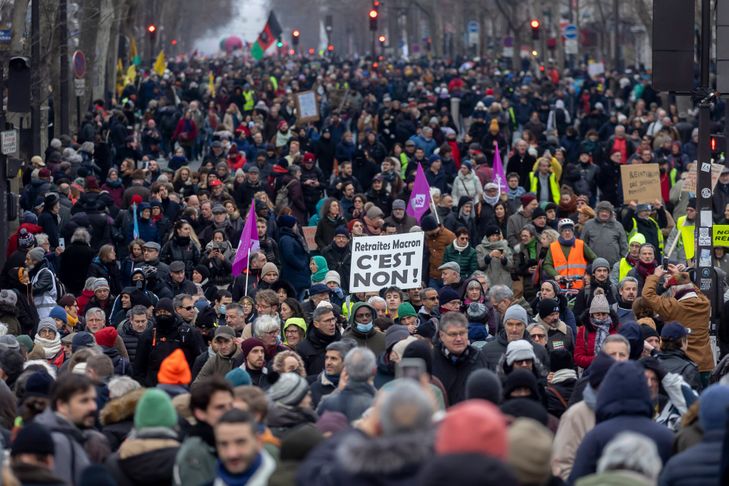 More than a million demonstrators, strikes at school or in transport: the unions succeeded on Thursday January 19 in strongly mobilizing against the pension reform. The eight main French unions have agreed on a new mobilization date, January 31, according to several union sources, confirming information from BFM TV.

“Over two million” people demonstrated in more than 200 processions in France, including around 400,000 in Paris, the CGT said, while the interior ministry counted 1.12 million demonstrators, including 80,000 in the capital.

Strike against the 2023 pension reform: Paris, Lyon, Marseille… Relive the demonstrations of this Thursday

A level of mobilization higher than that of December 5, 2019: at the start of the protest against the previous pension reform project, the police had counted 806,000 demonstrators in France, the CGT 1.5 million.

Some clashes reported in Paris, Lyon and Rennes

A few clashes, tensions or damage were reported in Paris, Lyon and Rennes, but Thursday’s day of action was generally calm.

The figures from the authorities quickly attested to a very significant mobilization: 36,000 people in Toulouse, 26,000 in Marseille, 25,000 in Nantes, 19,000 in Clermont-Ferrand, 17,000 in Rennes… There were 23,000 in Lyon, where the police suffered a few projectiles and made 17 arrests, according to the prefecture.

“We are clearly on a strong mobilization, beyond what we thought”, estimated the number one of the CFDT, Laurent Berger, after the first processions in the regions. The Minister of Labor, Olivier Dussopt, admitted on RTL that the mobilization had been “important”. Judging ” normal “ that a pension reform “causes concern”he indicated that it was necessary to ” answer “ and “listen to messages”.

Many public services were affected. 28% of strikers were counted in the state civil service by their supervisory ministry. Public broadcasting programs were also affected.

The movement followed by 70 to 100% of TotalEnergies employees

In education, the FSU union counted 70% of striking teachers in schools and 65% in colleges and high schools. The ministry figures for its part the mobilization at 42% in the primary and 34% in the secondary. A few dozen establishments were blocked in the morning in Paris, Rennes, Tours and Toulouse in particular.

On the refinery side, the movement was followed by 70 to 100% of TotalEnergies employees depending on the site. Fuel shipments were blocked, but work was to resume Friday morning, unless otherwise decided at any local general meetings.

EDF management reported 44.5% of strikers on its total workforce at midday. The Enedis electricity distribution network reported two voluntary and limited power cuts, in Massy (Essonne) and Chaumont (Haute-Marne). The CGT had warned of power cuts targeted at municipalities of elected officials favorable to the reform.

in Marseille, the free train against a polluting vehicle