At the Vieux-Colombier, the drama of being born a girl 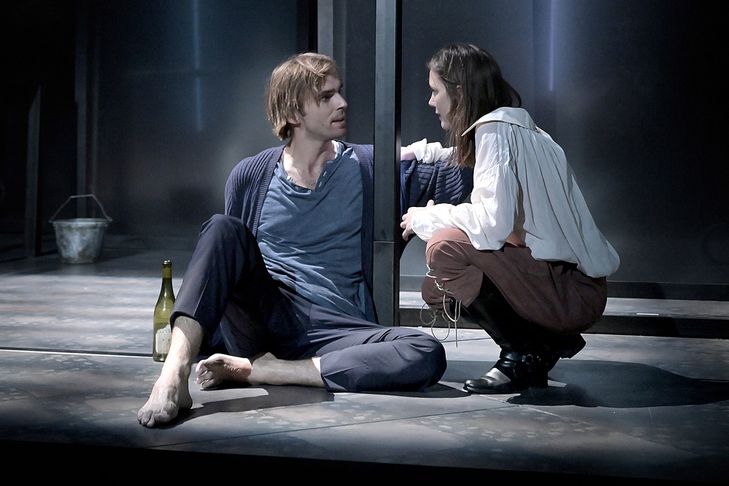 “Whether it be the law, whether it be morality (…), whether it be opinion or prejudice, the woman, by giving herself to the man, is necessarily either chained or necked.pable. » In this letter to Mademoiselle Leroyer de Chantepie, written in Nohant on August 28, 1842, George Sand (1804-1876) returns once again to a theme that is dear to her: the degrading status of women and their unjust and compulsory submission to the laws enacted by men.

She who claimed loud and clear her freedom, earning her living by writing, wearing pants and jacket, smoking cigars and taking a male pseudonym, will make the emancipation of women the fight of her life.

Composed in Marseilles in 1839, Gabriel is in line with this commitment. This “dialogued novel” that the writer from Berry wanted to see adapted for the theater – in vain – originally included around thirty characters. Laurent Delvert – supported by Aurélien Hamard-Padis – reduced them to seven, “like so many archetypes structuring the patriarchal society and forged by it”, according to the words of the director, focusing on the highly dramatic figure of Gabriel.

Prince Jules de Bramante raised his granddaughter in secret as a boy – naming her Gabriel – with one idea in mind: to leave her his name and his fortune. Father of two sons, he disinherited his youngest whom he did not like, at the same time disinheriting his grandson Astolphe, and, his eldest whom he loved having died, he bet everything on Gabriel, the daughter of the deceased. . As the law prevents any woman from inheriting, he disguised her, without her knowing it.

This dark machination is at the center of this complex plot. When the play begins, Gabriel is 17 and learns what he already sensed: his feminine nature. His grandfather then confronts him with a terrible choice: to remain a woman and spend his cloistered life in the convent, pretend to be a man and inherit. Gabriel chooses to wear masculine clothes, both literally and figuratively.

Not for fortune and power but for the freedom that this status offers him. Yet love will interfere in this romantic imbroglio. Gabriel falls in love with his cousin Astolphe, a passionately shared love – they secretly marry when the latter learns that his cousin… is a lovely cousin.

If the events follow one another at the same rhythm as the twists – the argument is not so easy to follow – then vaudeville has no place here. It is indeed a tragedy that we witness while observing Gabriel – torn between his love for Astolphe, his revenge against a grandfather who played with her and his desire to remain free at all costs. Claire de La Rüe du Can portrays with passion a courageous and forever offended Gabriel, Yoann Gasiorowski embodies with passion an Astolphe who, from a charming and magnanimous cousin, gradually becomes a suspicious and jealous husband…

Directed with great finesse by Laurent Delvert, the other actors of the Comédie-Française troupe are just as convincing. In particular Henri Lenglet, hieratic as an immoral grandfather, and Anne Kessler, who plays Settimia, Astolphe’s mother, magnificent with pain when her unconditional love bursts for a son who abandons her.

All evolve in a moving steel frame, haloed by a twilight light which escorts Gabriel’s inexorable descent into hell. The actors will never leave the set, seated on chairs arranged on either side of the stage when they are not acting, as if to surround this stubborn and wounded heroine better, to lock her up in a destiny that she does not did not choose.

At the Petit Palais, the piquant enigmas of Walter Sickert

five things to know about the philanthropic writer

Song, such a dear nostalgia…